Quips and summaries from experiencing and appreciating music in a city that is as foreign and familiar as they come - New York. So here is to music anywhere and everywhere. Starting from concert one on week one after the move in 2009.

Creative Ways to Interact with the Audience 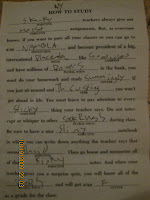 I have to share a few good ideas that I recently witnessed at the Port O'Brien show at The Mercury Lounge on October 14th. Port O'Brien, a California acoustic/indie rock band recently came out with their third album Threadbare on October 6th and have been touring to support the album. The indie powerhouse that is M. Ward (part of She and Him and Monsters of Folk in addition to a solid solo career) recently named Port his 'favorite new band'. I would check out their new single 'I Woke Up Today' to taste the flavor and see if you like them.
Anyway, they brought Mad Libs to the show! The greatest vocabulary game of our youth aka hard evidence that we were all little perverts on the playground. In between songs Port asked the audience for nouns, adjectives, etc. to fill out a page that they read at the end of the show. They have been doing one Mad Libs for each show across the past few weeks. A few interesting notes - Boston was WAY more dirty and politically incorrect than New York was and there was way too long of a pause before someone tried their hand at yelling out a pronoun, it should embarrass every third grade teacher. Overall, Mad Libs was a really cool way to engage the crowd and fill time in between songs to allow band members to quickly tune or switch out instruments. They were kind enough to give me the one from the show, see photo.
Another really cool thing that Port did was encourage a kitchen crazy end to their show. Before their last song, 'I Woke Up Today', they passed around wooden spoons, pots and pans, aluminum pie holders, and a whole bunch of noise making fun out to the crowd. It was a great way to end the showI am pretty impressed that they haul around a big heavy bag of all that crap from city to city.
The moral of this story is it pays to be creative with your shows and how you interact with your audience. It makes you memorable, it helps to show your personality as a band and it helps to shake things up from one gig to another.
Bonus - you can buy a whole bunch of different Mad Libs on this web site: http://www.madlibs.com
A fun little stocking stuffer or office present this year.
Posted by Talburtt at 10:32 PM 6 comments: Links to this post

If you are sick of your ipod...

Here are some artists I recommend checking out, downloading and changing up your music a bit. Give Pandora a rest and invest in some exploratory music time. You can listen to most of their songs for free on www.lala.com, a lot are also on www.pitchfork.com, or you can go to itunes - expensive house. Look to the playlist on the right for my favorite songs of these groups/artists.

Little Joy - side project of Fabrizio Moretti of The Strokes

Volcano Choir - side project of the guy from Bon Iver

The Temper Trap - so is this album

Mew - warm up to them, they are worth it

The Dutchess & The Duke - they sound a lot like The Kinks, so they can't go wrong in my book

Karen O and The Kids - whether you like the movie or not, this soundtrack is pretty sweet

Posted by Talburtt at 1:29 AM No comments: Links to this post

One Ring to Rule Them All... 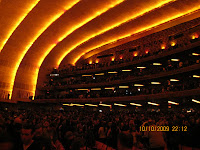 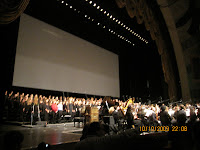 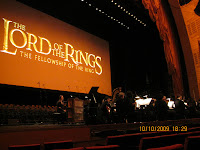 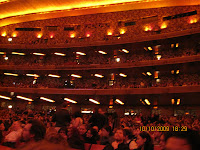 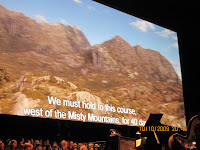 Five months after buying the tickets I finally got to see Lord of the Rings: Fellowship of the Ring at Radio City Music Hall this past SAturday on October 10th. There was a live orchestra, two adult choirs and one child choir for a total of 300 people under an Imax screen showing the movie. We had 6th row seats because we bought them right when they went on sale in May - I know we are nerds but nerds have great ideas and follow through with them.
The entire movie they were spot on with the music, it was really impressive to see all those people work together and make it look effortlessly. At any part of the movie they had parts of the choir standing up, kids going to the microphones for solos, a lady in a satin prom dress singing the elfish songs, and the conductor looking at a small screen with the movie showing to ensure the orchestra's timing. You could opt to see the violinist's fingers move rapidly, look up and see Legolas (aka Orlando Bloom in the role that made him a heartthrob) fighting Orc, notice how patiently the children in the choir wait for their time to sing or back to see all of the people that had filled the performance hall; there was not a boring moment. The whole experience gave me a new appreciation for composers especially movie composers - they have the ability to heighten the drama and really make the moment and create the world for a movie. Well done Howard Shore.
It was worth it to get the $90 dollar seats. I am already on the e-mail list for the 2010 tickets to see The Two Towers. It was a total experience and I highly recommend it. For the record, we are not the biggest nerds on the planet, the people that are going to the concert of all popular video game theme songs with a live orchestra in a few weeks at Radio City win the prize.
Here are some pictures of the event.
PS - NEVER wear jeans to Radio City Music Hall. It is too beautiful, has too much of a history, and proves to everyone you are a tourist, took the train in, and support the slobification of America. OK, I am done being bitchy and will stick to music and musician outfits from now on.
Here are a few of my favorite movie scores:
- Braveheart - James Horner, also did Titanic
- Last of the Mohicans
- Star Wars - John Williams, the greatest
- E.T. - also John Williams (Jaws is his too)
- Gladiator
- The Lion King
- Sound of Music
- This is Spinal Tap
- Purple Rain
- Phantom of the Opera
- Anything Danny Elfman does - Most Tim Burton movies including Beetlejuice, he was the voice of the oompa-loompas in the 2005 version AND he was the lead singer of Oingo Boingo
Forrest Gump - not the soundtrack but the Forrest Gump Suite, the scene with the feather, so pretty
Posted by Talburtt at 11:50 PM No comments: Links to this post

U2 & How to Snag a Better Seat 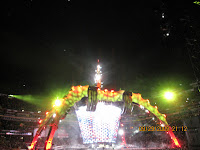 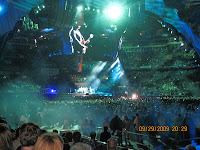 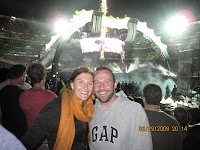 I keep a short list of bands I have yet to see and would be willing to pay their high price, do you?
- Red Hot Chili Peppers – I want to be part of their energy

- Madonna - To feel bad about my body

- R.E.M. – Not even a big fan but have heard of the magnetism Michael Stipe can yield

- Justin Timberlake - We all have our guilty pleasures

It was because of this list that I was pretty excited when the opportunity to see U2 with a group of friends came up. So I can now cross U2 off my list and you know what? It was an experience I now recommend to anyone, particularly if you like U2 and/or if you attend enough sports events or concerts where you can take the sheer volume of people you will see the concert with. There are downsides – it is an elitist environment with the VIP packages, the limos lined up, the stadium prices, the box seats, $9 dollar beer night hence the long line, etc. Also, as a person that is a tenured concert goer this was clearly a crowd that was not well versed on the rules of concerts. You get a very different crowd attending then a 300 person venue where the concert starts at 10pm on a Wednesday, etc.

That said, the upsides were immense - they rocked out for 2 hours and 15 minutes, they have such a catalogue to choose from and did a great job of combining the new with the old, the unknown songs with the overplayed (even though it was still fun to sing them word for word). Plus their sound, voices, and stage presence is varsity all the way. They passed the crucial 10,000 hour practice point about 20 years ago so you can imagine how comfortable they are on stage.**

My favorite part of the night was when I pulled a grand caper with my friend Captain Fabulous (actual nickname). We snuck out of our section 404 seats on a mission to get as close as we could to the stage and stay there. We brilliantly made it to section 138, had plenty of room and watched the entire concert from our elitist seats. Here is how we did it and here is how you can too, I have proven this many times over the years:

- When you go to a stadium/arena show there are so many seats that go to season ticket holders, corporations, etc. and so many of them go unused even if the concert is sold out.

- Wait until after the opening act and then go down to the area you are shooting for and wait until just before the headlining act comes on. It is good to get a beer, food and go to the bathroom, it may be your last opportunity.

- Wait until 30 seconds into the first song that the headliner plays, you want to get caught up in the rush of people getting to their seats. Weekend concerts can throw a wrench in the plan because some people hang out in the parking lot until the headliner starts and then rush in after 2-3 songs.

- Power walk and get behind a group of more than two so they will crowd the ticket checker and this is key - quickly, looking straight ahead/stage, power walk to the side and down away from the group and ticket checker. Keep walking but start slowing down after you are in the clear and look for openings of more than 2 that you can get into.

- Only do this with two people, it gets tricky with more. Getting to the floor level is more difficult because they often make you get bracelets and the checkers are more strict. We tried to get to the floor for U2, played dumb about bracelets, acted like we were headed back to get them and spotted an opening of +6 seats two rows above general admission. We were above the floor crowd and had direct eyesight to the front of the stage. No one came to claim the seats and we were super nice to the people around us, acting like we belonged there. It was perfection and we giggled about it all night.

This isn't rocket scientist and don't try to do it every time but have the guts to give it a try when it is a band you really want to get close and experience, be part of the vibe.

**The 10,000 hours of practice is referencing a well-known theory that in addition to ability you must have dedication and a solid work ethic; citing that every top professional, regardless of their field, will not reach their peak before practicing for 10,000 hours. Malcolm Gladwell references this theory in his newest book Outliers. He uses The Beatles and how they obtained their crucial practice hours, check it out!

Posted by Talburtt at 9:32 PM No comments: Links to this post

Talburtt
LES New York, NY, United States
taller than you think, redder hair than you remember, and more witty, crude, and loud than most girls. As an epitaph: "She was never boring"

What I always check...